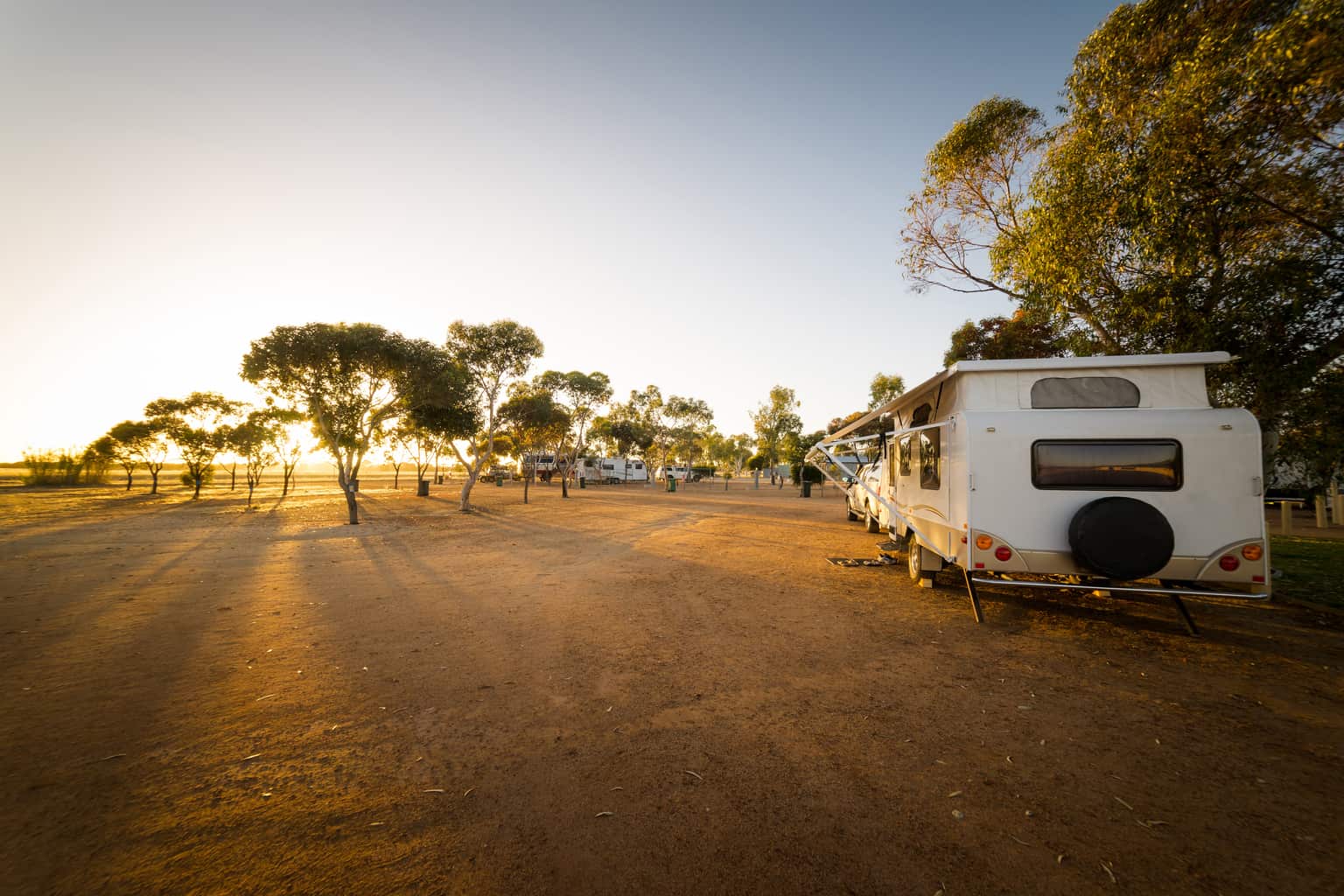 One week to go and no buyer’s remorse yet.

David and Pamela are near retirees (David went on part times status as of yesterday and Pamela retired from her nursing gig at the local hospital a few years ago and is working as a visiting nurse one day a week now). We bought the 26 foot (yes Pam, I know it’s about 30 feet tip to tip but it’s called a 26 footer for the living area) travel trailer, our portable motel room, a few weeks ago.

The seller has held it until we get our training and take our maiden voyage the weekend after the Fourth of July madness. We have been writing about our adventure so far and thought we would write one more post to fill in some final thoughts before we take possession.

This is one that when Pam mentioned it Dave slapped himself in the forehead. If it has tires it will, eventually, have a flat. And guess what. The trailer don’t come with a bumper jack. This was an Ace hardware item. Many of the sites Pamela reads suggested a 20 ton jack. Since the trailer is 5,700 pounds dry, and we cannot envision it ever going to 8,000 pounds, Dave opted for the 4 ton jack. Even if the trailer did hit 8,000 pounds it’s not like we’re going to lift the whole thing off of the ground. Overkill is one thing, but let’s not be ridiculous.

Although we don’t think of the travel trailer as a “camper” (it’s our motel room) we may wind up at a facility that does not include picnic tables.  So a VERY portable table is probably in order. Amazon had one that rolls up into a bag smaller than our bag chairs (we already had them).

We have dogs and can’t have them running loose. That’s a matter of basic manners and etiquette. Besides, miniature Schnauzers would probably be seen by a good-sized owl as a snack.

Uh huh. Dave was puzzled by this one. The idea, so Pam’s sources tell her, is that you can stick the soap dish in the window and put your cell phone in it, thereby gaining a bar or two of reception. Apparently, all of the metal in modern lightweight trailers makes cell reception iffy. Using the ersatz cell phone holder will allow your cell phone mobile hot spot to work.

Dave turned in his antique, steam powered Samsung Galaxy S3 on a brand new, state of the art, Galaxy S9. The new phone has the mobile hot spot function should such a thing be needed. Also, a better camera, longer battery life and a very cool display.

Different from the soap dish things. These are just basic suction cup hooks that you can hang on the outside of the trailer. If you need to, for example, let your wet towels dry, there they are.

This was highly recommended by many on one of the Facebook RV sites. You can cook pasta, rice, etc. in it without heating up the whole camper.

Because Pam doesn’t like to get burned and the flat top will be the primary cooking surface and that’s what the short order fry cooks use for a good reason and she secretly wants to chop and toss food like they do in diners…..

9. TV and wall mount for the bedroom

The travel trailer came equipped with a 50-inch high-definition TV in the living room. But it’s always nice to have a TV in the bedroom and at today’s prices, well, why not? The bedroom is where you will find Pamela on NASCAR Race Day, etc. lounging with the mini schnauzers and watching something more exciting on ROKU. (Dave editorial note – What could possibly be more exciting than a NASCAR race?)

Dave is the gamer and did not want to face the idea of moving his Xbox every time we took a trip. He checked at the local Game Stop and a used Xbox One was $220. Online, from that source of everything, Amazon, the Xbox with one of the Battlefield games and new controller was $260.

11. Closet organizer in lieu of chest of drawers

The 26-foottravel trailer will be, we are confident, an excellent rolling motel room. But it doesn’t have a chest of drawers or, for that matter, much storage for clothes and underwear at all. Pam found a short closet organizer at Target and that should go a long way toward solving the storage problem. 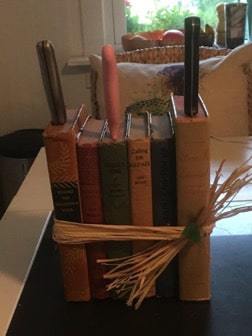 Made from old books laying around. Check it out.

14. Secret stash places for things that, well, you don’t want everybody who happens by to know about

Making the little secret places was an interesting project in itself. First, you need a book of course. If you’re like us and have made the switch to a nook or a kindle (nook for her, kindle for him) you probably have some laying around. If not, Goodwill does. 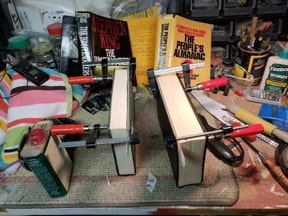 First step is to mix up some glue. Plain old Elmer’s white glue, not one of the fancy brands, the plain old white stuff, is your base. Mix it about 50-50 with water and then add a drop or two of dish detergent. The detergent serves as a wetting agent and ensures good penetration of the glue into the porous paper. I had a couple of pieces of plastic laying around that I used to separate out the first dozen or so pages.

If you don’t have stuff like that around, and I know most don’t, any plastic wrap, an old plastic bag, aluminum foil, or pretty much anything that would divide out those first few pages would work. 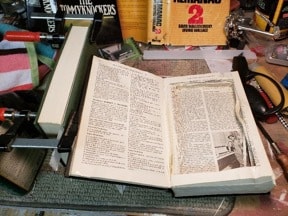 If you really want to have a super secret compartment, completely wrap that first several pages so that they won’t get affected by the next step. Then those pages would open separately and hide the compartment. I went ahead and made them part of the “block” of pages but I suppose the proper way is to wrap that first batch of pages.

Anyway, once you have some way to separate out that first group of pages, clamp it up, or if you don’t have clamps laying around you can weight it but using clamps makes it a bit easier to handle, and thoroughly soak the three exposed edges. I used an old small brush I have laying around. Don’t worry about over soaking. The glue dries clear and won’t show. The brush cleans up with warm water and a few drops of detergent. 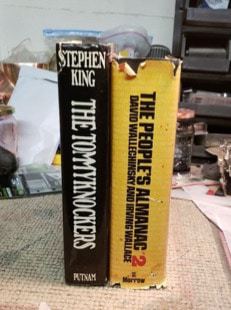 Once it has set up for a couple of hours you can unclamp and then open the book up at the front. Now the hard part. Mark a perimeter about a half inch in from the edges and start cutting. A utility knife works better than an Exacto knife since an exacto blade is too delicate for this work. Paper is hard on cutting edges and plan on using a couple of blades at least. If you really want your corners to be perfect drill quarter inch holes at them. Use a straight edge, I used my combination square because it has a nice steel ruler but any straight edge will work. Figure on cutting a few pages at a time. It’ll take a while.

Once you have it deep enough to handle whatever you want out of sight, put the dust jacket back on and there you have it. The purloined letter hiding in plain sight as they say. 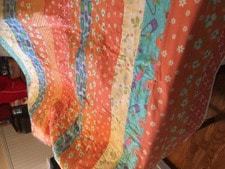 So Dave doesn’t freeze to death while the bride is comfortable. Pam started the quilt some years back when she got her Serger sewing machine for Christmas and this seemed like a good time to finish it up.

Dave bit for the Bell and Howell TacLight commercial a few months ago and got one. He loved it so much he ordered two more. They run on AAA batteries and with LED bulbs should be long lived. With the latest NRA renewal offer we’ll be getting an LED lantern soon too.

As an extra added advantage, the strobe light, you know, the one the TacLight guy advertises as “disrupting” intruders, also makes an absolutely excellent warning if you have a breakdown. We saw this on an earlier vacation and it was visible and attention getting in plenty of time to get slowed down. Pam says her sources recommend at least two flashlights.

Flamingos and hanging pretty bunting on all windows possible. Why is it the decor is so boring and drab? Are the designers of our beautiful RV’S color blind? Do they really just see everything in brown or black with some orange thrown in? Pam has several bright buntings to hang in front of the “valances” until she can figure out how to remove said valances and make bright and cheerful valances for every window.

Pam has read horror stories of plugging in to camp grounds and getting their RV parts fried due to poor wiring and lack of grounding. So….. of course we go to Amazon and it will be here by Wednesday. The list of things needed never ends….. does it?

Dave has handled trailers, a pop up way back when and a 12 foot box trailer when the kids were quarter midget racing. The thing is, when it came to hooking up you just got “pretty close” and then muscled the thing around. With the travel trailer, with a tongue weight of something like 500 pounds and NO wheel under the foot, this will be impossible. The low cost solution is a pair of flags (or, balls) on rods that can be magnetically attached to the ball and the hitch. Just back up until the balls touch and then straight back the last couple of inches. Or anyway that’s the theory. The balls were from Amazon for about 20 bucks.

So as we are down to 7 days until we go on our maiden voyage….. I have a list of questions to be sure and get answers for from our RV Dealer “trainers”. Of course I know I will have a hundred questions after the first maiden voyage begins, so I have a friend in Washington State who I can and will call if we get in a bind. She advised we take a clip board to write on and to video any procedures, i.e.: sewer line, etc. that we can. We will see how we do once we hit the RV park where we have reserved a pull through RV spot with shade.