Toy haulers are useful to bringing your favorite outdoor “toys” on your family trips, including those great four-wheelers, for lots of family fun.

Toy haulers and four-wheelers both vary greatly in their dimensions. Therefore, every toy hauler and four-wheeler pairing is different. Continue reading to find out the right fitting for yours.

Measuring Up Your “Toy Box”

When it comes to understanding what size of “toy-box” is right for you, you need to understand all of the different options. The type of trailer you have (or will have) will affect the amount of garage space you will get.

A fifth wheel will generally offer a larger amount and a wider variety of separate garage space. A “separated” garage space means that the measured area is specifically designated as the garage. If the space is attached or “un-separated” then you will be looking at a smaller garage space and a space (like the kitchen) that can be converted into garage space, by folding back couches, and tables to make more room for toys.

The table below shows a quick visual of the length and width of the smallest and largest toy hauler garages you can find, as well as the common sizes for a four-wheeler.

So you’re going on the most ultimate outdoor family adventure of a lifetime, and you have everything planned out perfectly. You’re going to have to drive a while, but it’s absolutely worth it because you’re hitting up the dunes.

It’s going to be epic with all of your family on four-wheelers, but… wait. Four-wheelers? Road trip? The whole family too? This could be a problem. But don’t worry; I’ve got your back. We can figure this out together. Little did you know, sizing up your toy hauler and pairing your four-wheelers to it is much easier than you’d expect.

As you can see in the table, there is quite a range in the sizing of toy haulers. Fitting them is dependent on the length and width of your toy hauler garage and four-wheeler.

To find the sizing of your toy hauler to see if it can indeed carry two adult-sized four-wheelers, you can check the specs online with your brand and serial number, or sometimes it can be included in the manual for your toy hauler.

To do this, you’re going to want to focus on just the back garage for your toy hauler and on the interior measurements. Make sure you leave a little bit of room for moving space so as to not scratch up the four-wheelers too badly.

Don’t forget about finding out how much weight your toy hauler can hold.

This is very important to know because even if it looks like your toy hauler can hold two or maybe even five four-wheelers, it might not be able to carry the weight of all of those heavy four-wheelers.

Too often do outdoors-men find that they might have overestimated the strength of their toy hauler just because it was so big and seemed like it could fit so much.

And believe me, the last thing you want to have happen is having your “toy box” collapsing or breaking down in the middle of the road with all of your favorite “toys” inside. This is when picking the perfect, heavy duty toy hauler comes in handy.

Once you have the measurements and weight limits of your toy hauler and four-wheelers figured out, you need to think about the sizing and types of four-wheelers.

Now, don’t forget about the sizing of those pesky little four-wheelers. If you’re going to have two child-sized four-wheelers, the math is going to be just a bit different.

Or perhaps, if you’re finding that your toy hauler is large enough, you might want to bring two adult-sized four-wheelers and one Barbie Princess-themed child-sized four-wheeler for that cute, little five-year-old you’ll have sitting in the back seat, just begging to have a ride on the four-wheeler. Now she can have her own!

Carrying a couple of utility four-wheelers, and they’re not exactly meant as “toys” anymore, but you’re handling the “big boy” adventures? Well, as I’ve said before, size matters.

So just remember to think of the size and type of outdoor toys you are using next time when you’re considering how to fit everything into your toy hauler for your next adventure. Just a hint, it helps to put the larger four-wheelers and outdoor toys in first and finishing up with the smallest outdoor toys in the front. 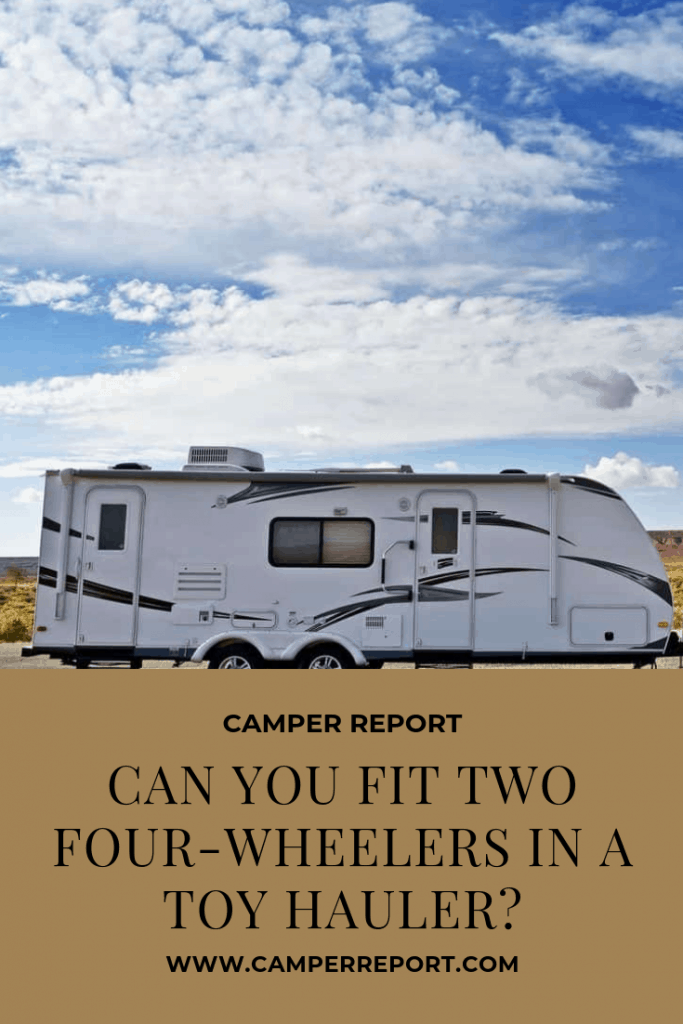 Wondering which toy hauler will be just the right fit for all of your four-wheelers and other outdoor “toys?” Check out the fan-picked favorite for toy haulers to carry four-wheelers especially.

Finding the Perfect Fit for Four-Wheelers

Clearly, toy haulers can be all different sizes. Sure there’s an average interior width of 7-8.5′ to go off of, but what about the length and height? You need to go on that ultimate family adventure don’t you, with all your outdoor “toys?”

Don’t worry, I’ve got you covered. If you don’t already have one yet, go out and get that toy hauler that will fit your four-wheelers perfectly without any of that troublesome extra space left for them to bump around in.

But don’t stop there. Go see how your toys and toy haulers are measuring up and pair them up. Find a new toy hauler if you don’t have one yet, and…Go find your new adventure!