Skip to content
Table of Contents show
Things That Will Attract the Bear
Taking Necessary Precautions
Bear-Proofing Your RV and Campsite
Protecting Yourself From Bear Encounters or Attacks
Share this post:

Forget the stories you’ve heard from Goldie Locks and the Three Bears or the Little Bear cartoon. These bears are not your friends, they will not be cleaning up after themselves, and they are not a guest you want to invite over.

Bears are most often attracted to anything that has or had food or anything that has scented. They are strong and intelligent animals that have been known to break through doors, tear through tents, and even pick locks; therefore, they can break into an RV, although they are less likely to do so.

Here are some important things to know before you take your RV into bear country.

Things That Will Attract the Bear

Believe it or not, bears are a whole lot smarter than you think. They don’t care if you’re in a pop-up tent, an RV, or sleeping under the stars. Food is food, no matter what it’s being kept in; they’ll still be able to find it, and they will break in.

As a wise friend once said, RVs, especially the soft-sided pop-up ones, are like the vending machine on display for bears to stop at before ripping into the candy bar that is the tent.

So what attracts a bear the most into your RV or the campsite? Pretty much if it smells–at all–it will attract the bear. The most obvious thing to clean up from your campsite to keep the bears coming from a visit: the food. Cooking your food, leaving it out, and even leaving the leftover crumbs and residue on your dishes and tables will be enough to attract the bears to your RV and campsite.

Then there are the less obvious things like scented toiletries. Oh yeah, bears can smell those too if they’re close enough. That scented lotion or even your toothpaste? It attracts bears. Crazy right? It’s almost like everything that you use will attract those pesky bears.

Bears are pretty intelligent and strong animals. Not only can they smell even the slightest scent like toothpaste but they can remember they’re favorite food stops as well.

If they’ve been to your campsite once or twice, even if they were just wandering around, and they smelled food, it stays in their memory, and they are more likely to come back.

See? I told you they were smart. Though in their defense, if I knew of a place to get free food that I didn’t have to hunt for or make myself, I probably would make sure to remember it and search through it for leftovers as well.

But don’t worry. I’ve got you covered with some extra precautions that you can take to make sure that the bears don’t come breaking in.

So we already went over how bears are so easily attracted to any remains of food that might be lingering in your RV or around the campsite. How do you deal with this? (Don’t worry; there are other ways beside starving yourself for a week or only eating elsewhere.) Food Lockers.

Lucky for you, most campgrounds that are also known to be part of the bear country are prepared with food lockers.

The food lockers are often made of durable, bear-proof metal that are pretty good at keeping the bears out of your food. They’re typically large enough to store two large coolers along with extra space for dried goods.

These food lockers come with latches to keep the bears out, and while bears are smart, these latches should be strong enough to hold off the bears as long as the food locker is latched properly.

So what do you do with it? Store ALL of your food in it, and if you’re unable to get to the bear-proof dumpsters provided by the campgrounds in time before dark, store your bag of trash in there too. Seriously any food will attract the bears, including the rotten food left in the trash bags and trash cans.

Just please do not take any chances with your food or leaving it out when you’re in bear country.

Going further with taking precautions with food, do not forget about the tables. Bears can even smell the smallest of crumbs and residues of recent meals. That’s right. Make sure you wipe down those tables really well and even do some sweeping if you have to.

You don’t want those bears coming over for a visit. Especially when the only culprit that invited them over was a measly, little crumb left under the table. If you have to sweep up some dirt and some leaves in the process, do it. When you’re in bear country, you will want to do everything you can to make sure those bears absolutely do not feel invited to your RV or campground, even if it makes you feel silly.

Try getting the unscented toiletry items from the stores when you’re preparing and packing for an RV trip. Sure, they might not smell all nice and pretty like your daughter’s favorite peach blossom-scented lotion from Bath and Body Works, but it will keep not only bears but other curious creatures away.

But really, who’s going to keep track of what you or your RV smells like anyway besides the bears and other wildlife that you would rather keep out instead of in? Do yourself a favor and get those unscented products for your future camping trips and RV adventures.

Lastly, the windows and doors. Have you ever seen those shows where they’re testing out the security of a house and show a planned burglary happening in close detail? Or maybe you’ve seen some of the spy movies where they show how to break into something top secret?

Imagine that with the spies or burglars replaced by bears. I’ve already told you, these bears are smart. They’ve been on these campgrounds long enough to know the ins and outs of breaking into just about anything and getting free food.

Remember the food lockers I mentioned earlier? The reason why it’s so important to make sure you’ve latched it properly is because a lot of those bears who have been around the campground for a while have practically trained themselves to get into the food lockers that haven’t been latched.

They can get through windows that have been left open during the day while you’re on a hike or even pry open those doors that haven’t been locked. Some rumors say that they can even pick open the locks–granted it won’t be as neat and unnoticible as the expert spies do it in the movies but rather destroyed.

Now, whether or not you want to believe those rumors are up to you, but I’m not sure I would recommend testing it in any way.

Just imagine coming back to your RV after a nice, long hike up in the mountains, opening the door that you forgot to lock or seeing the windows that you forgot to shut and lock, and seeing a grizzly bear–or whatever bear it would be for your specific region–prowling through your precious RV. Scary, right? No one wants to ever have to go through that, and I don’t want you to have to go through that either, or even come close to it.

Though it is unlikely that a bear could break into a metal RV, there are things to be aware of regardless. And, as a little added bonus–you’re welcome–I’m even going to give you a few extra tips on how to bear-proof your RV and campsite.

Bear-Proofing Your RV and Campsite

Now let’s be honest here. Who actually believed at first that a bear could never break into an RV? I mean it’s so much harder than a flimsy, little tent and so much better armored and protected, right? Though it would probably make the news if a bear broke into or scratched the side of an RV, it is still a possibility!

There are ways to make your RV and campsite just a little bit more protected against those pesky bears.

One idea to bear-proof your RV: solar powered motion sensor lights. If you are the type of person that gets hot at night or you’re just camping in a hotter climate and you would prefer to keep your windows open at night, but don’t want to deal with the bears breaking in, these lights are for you.

They’re motion detecting lights that will shine bright if someone or something comes by it without leaving anything for you to worry about. If Mr. Bear is taking a leisurely evening stroll and you’ve left your windows open for the night because it’s just way too hot outside, these motion-detecting lights will take care of you.

Just put the lights by your open windows and anywhere else you might want them on your RV, and the lights will flash on as soon as they sense the bear. The sudden burst of light will either shine into the bear’s eyes or just be suddenly bright enough to scare them away, and you can keep sleeping peacefully.

You could also consider getting a motion sensor alarm that you can turn on at night, and it will alert you when a bear comes near your RV as well as sound an alarm to scare off the bear.

Another thing to consider is having your own steel bear-proof storage container to store any sort of item that you’re afraid could track the bears. That way, you’re prepared and good to go even if the campground you’re visiting doesn’t happen to have a bear-proof food locker for you to use.

Hopefully, you will at least consider using one or two of these items to bear-proof your RV and campsite, but just in case even those don’t work, plan on bringing protection.

Protecting Yourself From Bear Encounters or Attacks

Say you tried out all of these precautions and bear-proofing techniques, and you still end up encountering a bear. Or maybe you’re just one of those unlucky people to find a bear while on a hike. It’s scary, but there are ways to protect yourself.

Bear Spray: it’s like the pepper spray that you can use on questionable humans, but a much stronger version that’s meant for bears. This is something that I always like to have on me when I’m camping or hiking just because I never know when I might encounter a wild bear.

If you end up seeing a bear coming your way and there’s no easy way to avoid it, use the bear spray to make a cloud of mist that will not only momentarily blind the bear but also slow it down from getting to you, hopefully giving you a chance to get away.

Make it known that you are a human: Talk to yourself or the bear to let it know that you are human instead of a predator. 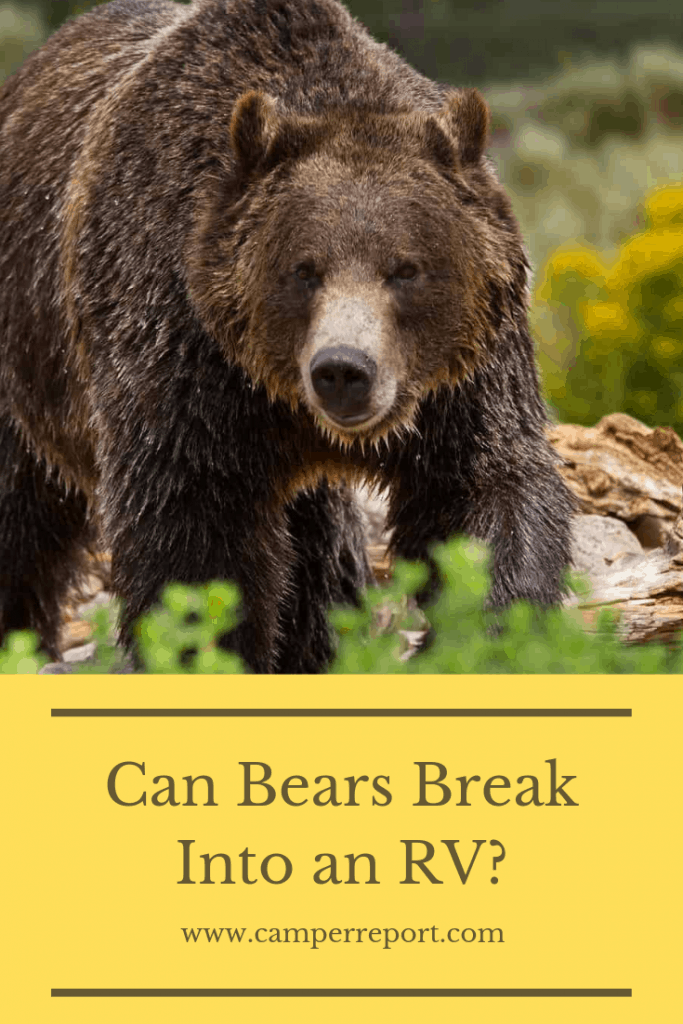 As long as the bear isn’t ready to maul you, you can say a few words to it to let it know you’re human and not a threat. This will give the bear time to hear your voice and not feel scared. A scared bear is not so easy to handle compared to one that has been surprised, scared, or angered.

Though it is very unlikely that a bear break into your RV, it is best to protect your area by following the simple steps above. Don’t worry too much, and have a fun vacation!

3 thoughts on “Can Bears Break Into an RV?”

The Latest RV Recalls For 2023