The travel trailer virgins survived their first trip – 86 miles – and first problems – no wifi, no highspeed wifi through the mobile hotspot, TV blew up, water failed (to the trailer, not IN the trailer). It was still fun and besides that, we saw a brilliant side to side leveling system.

According to Amazon (the source of all things), you can get such systems for around $40 to $50. The one we saw appeared to be made of 2X10 lumber and Dave thought that would probably be quite a bit cheaper. Turned out to be under $15. Here’s how.

Preface – The system we saw involved two layers of 2X10s. Since the actual thickness of a nominal 2X something is actually 1 ½ inches (Dave is old enough to remember when that was more like 1 ¾ inches) you obviously will not get a full two inches of lift. If you set your tires on the first level you’ve got 1 ½ inches of lift. Move up to the second level and you’re at 3 inches. Since we are distinctly NOT campers but, rather, users of our portable motel room, if it’s more than 3 inches off we’re probably going to find another place.

The tools needed were a saw and a sander. Well, a drill too to drive a few screws. Dave has a cutoff saw and used that although a standard circular saw (aka skilsaw) would work or, if you have a good arm, a plain old handsaw would work. The belt sander was used to make the bevels but an angle setting on a circular saw would probably work as well. So, let’s do it:

The big question is, of course, DOES IT WORK?!?!

First, line it up. 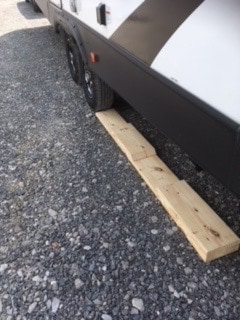 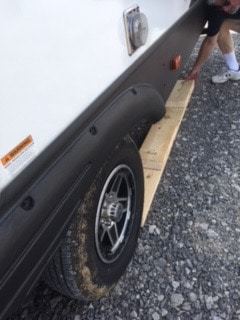 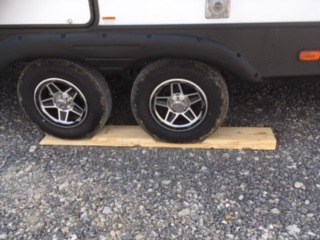 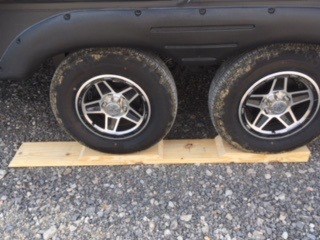 So YES, it worked EXACTLY like it was supposed to and now resides in our basement.

Adding a Platform for the Camper

One more bit of construction was needed.

The bride’s arthritis makes stairs an iffy proposition in any case. That first step onto the trailer stairs was a bit of an issue. So a platform was in order. This was a much easier project. The materials are two 8’ pieces of that artificial deck surface that is supposed to last forever. Caught them on sale at Lowe’s for about $8 a piece. Also, two 8’ common 2X4s.

Dave cut the 8’ pieces into two 48” pieces meaning there were now 4 48” pieces of the decking, One of the 2X4s was also cut into two 48” pieces. The nominal 6” deck boards were laid out and then the two 2X4s on top. The measurement to make the frame exactly fit the decking turned out to be 20 5/8” for the cross members but that might be different depending on the materials you choose to use.

The frame was screwed together as a simple ladder. The deck was screwed to the frame. And voila, a nice platform plenty sturdy for any use and heavy enough that it won’t be moving without significant human intervention. Here’s what it looks like – 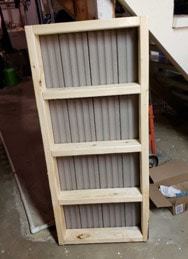 The decking material is thick (and heavy) –

It makes a good platform – 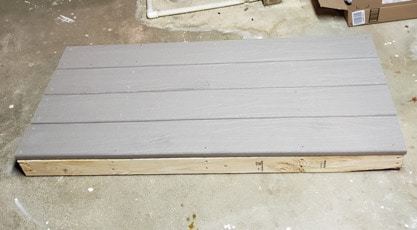 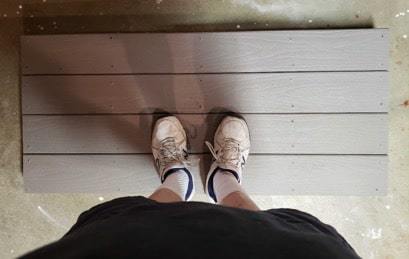 Okay, that’s it for now.

We’re off to the Missouri Ozarks next week. That will be our final shakedown to make sure Dave (who so far is doing the driving) is okay on winding state roads. Also, we’ll be seeing if that new TV (replaced under warranty) works and how well everything works with the new data program on the cellphones. After that, the next stop is Chattanooga.

The Latest Happier Camper Models In 2022 The RV industry is constantly in motion and there are always new arrivals to enjoy. Happier Camper recently announced two new campers that customers...

You'll be using the truck fuel stop lanes at at truck stops. Photo: Shutterstock What Are The Benefits Of A TSD Fuel Card For RVers? Based in East Texas, TSD Logistics is a freight...