There is no denying how popular the motorhome movement has become throughout the years, but very few people pause to think about how popular motorhomes have become in other places, other continents even, like in Europe.

So, what are the most popular motorhome models in Europe?

In this article, I will go more in-depth about each of these motorhome models and then talk about what makes European motorhomes different from motorhomes you can find in the United States.

The Volkswagen California Camper Van looks like a classic Class B Motorhome with a popup canopy ceiling (which, by the way, includes a sleeping area, pretty cool, right?). It is under seven feet tall, meaning it will fit in garages, under bridges, and around tight street corners.

There is a full kitchen included, something you don’t usually get with the Class B Motorhomes you can find in the United States. The kitchen includes a stove with two gas burners, a sink, and a refrigerator, so you can conceivably take your whole family on a trip and not have to break the bank by going out to eat all of the time.

Of course, with the full kitchen, you are going to have to sacrifice something else. The Volkswagen California Camper Van does not come with a toilet or any area to store the toilet.

There is, however, a removable LED lamp light attached to the interior side of the van that can be taken out for late-night porta-potty trips (those Europeans think of everything don’t they?).

Along with the popup ceiling sleeping area, the table and bench seats fold down to create another full-sized sleeping area. Most owners of the Volkswagen California Camper Van use this feature to have two adults sleep up top and two kids sleep on the bottom.

When not being turned into a bed and slept on, the table can fold into the galley kitchen, making more legroom. The bench seats can be folded back for seating while driving. The front two seats can also swivel so all four of you can eat together at the dinner table.

The Volkswagen California Camper Van has a powerful engine and great wheels and tires, making it able to travel smoothly on both eight-lane highways and dirt roads.

This motorhome in Europe has an average cost of around €45,000. This cost includes the VAT (Value Added Tax) that the United Kingdom uses as a source of governmental income.

The Eriba Touring 820 is actually a trailer that you can hook up to a vehicle as small as a family car (most European motorhomes are super light). But I think that you’ll find that it is the coolest trailer that ever trailered in the history of trailers.

This trailer is less than four meters high and less than nine meters long. It comes with a full kitchen, including a stove with two gas burners and a sink, and a full bath. You won’t usually get a motorhome, especially in Europe with a full bath, so this is a great deal. It even includes a shower!

Besides the classic amenities, you’ll find a spacious dining nook that can be converted into a bed and faces a television. There is also a large sleeping area located at the back of the trailer.

Everything in this trailer is new, sleek, rounded, and elegant. All of the curves are designed so that you get the most space inside of the rounded trailer and look stylish while doing it. There are also large, wrap around front and rear windshields for maximized vision both while driving and while lounging.

The Fiat Ducato Motorhome is extremely popular because of the variety and choices it gives you.

Mostly, the Fiat Ducato Motorhome is a base on which you can add more and more onto. That means the price also fluctuates. It is also the only motorhome that has roadside assistance available nearly everywhere in Europe.

The assistance includes 51 countries and is available any hour of the day, any day of the week, and any week of the year.

Basically, the Fiat Ducato Motorhome is a classic, run of the mill Class B Motorhome that you would find in the United States. Although you do have an option of including a toilet area, most of the motorhomes in Europe do not have space for toilets or a bathroom area, so you might have to forgo that option.

This motorhome is light and small, with claims to be the most maneuverable motorhome on the market, able to travel just like a car. You will be able to go on dirt roads and highways with the same ease in this motorhome.

There are options for five different wheelbases, six different chassis lengths, and four types of engines. There is usually a king-sized bed, a small kitchenette (including a convection stovetop and a sink), and 4X4 driving.

There is a pop-up sleeping area in the ceiling and a bench seat that can be converted into an additional sleeping area. There is a small kitchenette with a gas-powered stovetop for cooking and a sink.

A table folds down and the front chairs swivel so that the bench seaters and the front seaters can eat together. Again, as is typical, there is no bathroom area, but there are always public restrooms available, so don’t sweat it too much.

Mercedes actually teamed up with Westphalia to create the Mercedes Marco Polo, combining two companies known for creating luxury camper van and conversions. The Mercedes Marco Polo uses a lot of yacht features, meaning all of the furniture and amenities are stylish, sleek, and efficient.

The Nissan e-NV200 is becoming more and more popular because it is completely electric. Some of the kinks are still being ironed out, so, unfortunately, the Nissan e-NV200 can only drive around 124 miles before it has to be charged.

I guess you can actually travel to about three countries in Europe and only travel a total of around 124 miles, but still, it is not an ideal situation.

The good news is that the battery can be charged from 0% up to 80% in under an hour, so you can travel all day with brief, hour-long adventures while you wait for your Nissan e-NV200 to charge.

Like most of the motorhomes that you can find in Europe, the Nissan e-NV200 has a pop-up sleeper canopy in the ceiling and the bench can be laid down and converted into a second sleeping area.

This kitchenette included, unlike quite a few motorhomes, comes with a fridge in addition to the usual sink and gas-powered, two-burner, stove-tops. The two front seats can again swivel as well to accommodate four-seater dinners.

This motorhome is also pretty popular for how bright it is inside, thanks to the numerous large windows. It is light and small, making it easy to maneuver, and will be able to get you anywhere you want to go.

Of course, you will have to be conscious of the fact that you will need to be within 124 miles of a power outlet so you can plug in your motorhome when the battery runs low.

The average price for the Nissan e-NV200 is around $25,165. That is, of course, just the starting price, and the more additions you make to your motorhome, the more expensive it is going to get.

The Differences Between European Motorhomes and U.S. Motorhomes

Motorhomes in Europe are much smaller than the motorhomes you would be able to find in the United States. I am talking about “smaller” in terms of both size and weight.

Usually, the sizes of motorhomes in Europe go something along the lines of this:

Motorhomes in Europe have to be smaller because everything in Europe is a whole lot smaller than in the United States. The roads are very narrow, often only allowing for one car to pass at a time, despite technically being two-way roads.

Some main streets in Europe are cobblestone roads that actually look like pedestrian walkways.

Everything in Europe is smaller and tighter, so the motorhomes have to be small and maneuverable so you can travel with ease.

Motorhomes in Europe also have to weigh less because there are actually different driver’s licenses that you have to get if you will be driving a vehicle that is over a certain weight (usually three and a half tons).

When you are buying an RV in Europe, you have to be very careful about how much your RV weights and how much weight you can add to it.

If you go overweight on your RV, your insurance might not cover it, you might get fined, or you might have to get a different driver’s licenses to make sure that you are qualified to drive your RV.

So really there is no point in Europe to have a motorhome that has the potential of becoming wider.

That being said, there has been a slow (very slow) integration of motorhomes with slide outs on the RV market in Europe. Who knows if the trend will ever truly catch on. Most of the slide outs are appearing on the bigger motorhomes, and Europeans typically avoid those larger motorhomes in general already.

Along with forgoing slide outs, many Europeans also forgo bathrooms. Most European motorhomes do not have black tanks at all for toilets to run into. If a European motorhome does have a toilet, they usually come with cassette toilets. If there is not a toilet, as is common, the RVer will just use a public restroom.

Cassette toilets are small toilets that empty into a container that looks a lot like a suitcase. When it comes time to empty the suitcase, you can just pop it out and take it to the dump station.

It even has wheels to make it easier for you. Cassette toilets can also be emptied directly into a toilet so you don’t have to pay for a dump station trip.

Europeans are a little picky about their insulation in their motorhomes. There are few seams, and everything is double paneled. It helps that they do not have slide outs and can fill that space with lots and lots of insulation. Some motorhomes even have heated floors.

The weather in Europe is famous for being a little chilly, so it makes sense that they would want good insulation.

Because they have such good insulation, European motorhomes won’t usually have AC units, converters, or generators. Generator usage is often completely banned in RV parks in Europe because they make too much noise. Europeans like their quiet.

Solar panels are a common upgrade, though. Without a generator or a converter, they need to get their power from somewhere besides the motorhome battery, and Europeans are notorious for “going green,” so seeing installed solar panels on European motorhomes is very common.

European motorhomes let nothing go to waste. Sink covers double as cutting boards and then double again as additional shelves. Stairs have storage, as do benches and beds. The cabinets are deep and cover almost every additional inch of the motorhome.

Many European motorhomes even have little “garages” in the back of their motorhomes to store extra supplies and bikes for the trip.

Instead of one single queen size mattress, many European motorhomes have two separate twin beds. This helps maximize the space and actually gives you a larger sleeping area in the long run. 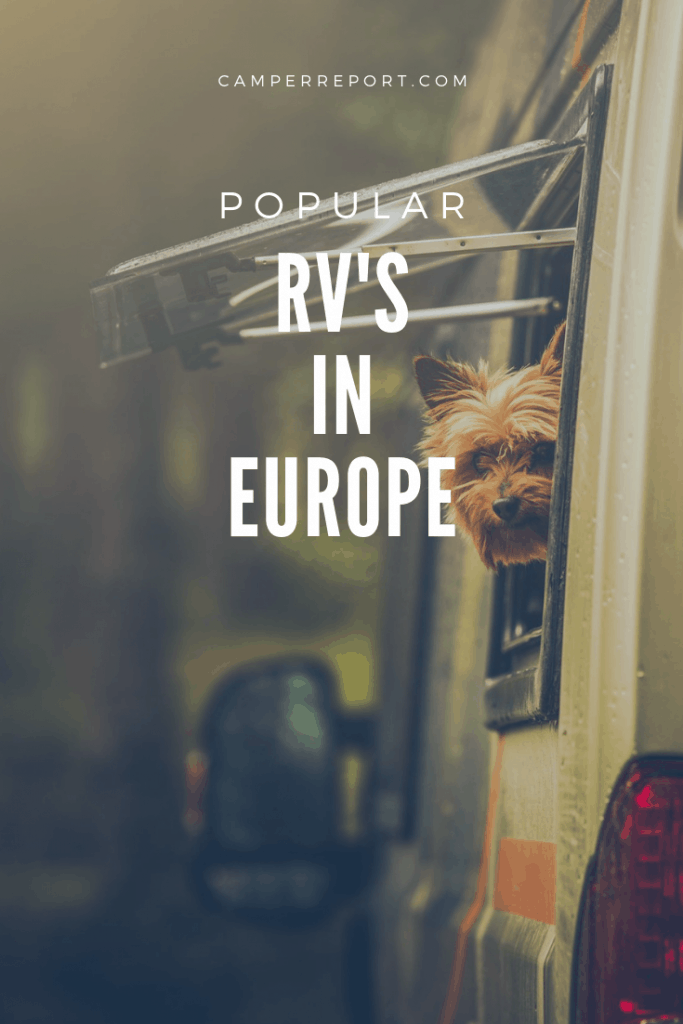 2 thoughts on “Most Popular Motorhome Models in Europe”

link to How To Make Money With Your RV

The Best Ways To Make Money From An RV You can do so many things to make money while on the road. You can work camp, take seasonal jobs in different parts of the country, or work remotely....