As the motorhome lifestyle has become more and more popular in the United States, it has also been gaining popularity outside of the states in places as far away as Australia.

And the most popular models include (you can get each model with more or fewer seats):

In this article, I am going to go into each model and talk about the different features, advantages, and disadvantages that each one has. I will also talk about what makes Australian motorhomes different from motorhomes in the United States and how the lifestyles differ between the two countries.

The most common companies that make two-seater motorhomes are Volkswagen and Mercedes. I would caution against a Mercedes if you are going to be traveling a lot because a Mercedes motorhome can only be serviced by a Mercedes A or B service.

If you are traveling a lot, it might be hard to find one and it could end up costing you a lot of money to get to one ( trust me, you will break down).

A two-seater motorhome only has a driver’s seat and a passenger’s seat, which leaves a little more room for other features, including a shower cabin and toilet. There is also a kitchenette, a workbench, and a table with benches that can be converted into a bed for two.

You can enter the living area from the front, through the sliding door on the side, or through the double doors on the back.

Of course, because it is smaller, you will have less storage, but if you are RVing, you have already crossed the bridge towards downsizing.

There are also two-seater motorhomes that have an attached “pickup” truck. These are called Class B Motorhomes and have a sleeping area that extends over the cab of the truck. You cannot access the living area of the motor home from the cabin but you do get better sleeping accommodations.

Three-seater motorhomes are the rarest style of motorhome in Australia (and really in general). They are the same size as the two-seater but provide less living space due to the extra seat.

The third seat is positioned behind the driver’s seat on the right side (this is Australia, remember?) and can be converted into an extra bed for one.

A three-seater motorhome is perfect for a couple traveling with a child because the extra bed is so small and really you couldn’t fit much else inside of this style of motorhome. It is still easy to drive and park, and it is cheaper than other motorhomes to fill up with gas (oh, sorry, they call it “petrol” down under).

Once you get up to four seats in a motorhome, you have to start making the actual vehicle bigger, or you seriously wouldn’t have any room in your motorhome.

Although you can access the back of the motorhome from the cab area, the only other entrance is through the sliding door on the left of the motorhome. The extra seats (located at the dining area) can be converted into the extra bed for two.

The second bed is located above the driver’s cab (children should take the lower bed, as the upper bed has no guard rails or nets; you could, however, install those if you so choose to).

There is still a kitchenette, a workbench, and a shower cabin included. This style of a motorhome is best suited for a family of four, a group of friends, or two couples. If your group does consist of two couples, you might want to consider buying the six-seater motorhome instead.

It is not much more expensive than the four-seater motorhome, and you can leave two beds made up while still having 24 hour access to the table and benches.

Five-seater motorhomes are as rare, if not rarer, than three-seater motorhomes. Though they have room to seat five, there is still only two bed (though the second bed is really rather big). You can access the back from the cab or from the sliding door on the side of the motorhome.

In order to fit five seats, there is a seat in the middle of the driver’s and passenger’s seats and then the two seats in the living area of the motorhome. The dining table and benches can be converted into a large bed that can sleep three (kind of).

The second bed is located above the first in a loft area. It is recommended that the parents sleep in that bed since it has no guard rails or safety nets.

This model is the best model for families with three kids, especially if all of the kids are small. It is harder to drive around and park and more expensive to fuel up, but it does provide plenty of space for five people. There is still a shower cabin and a kitchenette as well.

A six-seater motorhome is built a lot like a four-seater motorhome. However, it is longer and wider in order to make room for two extra seats that can be converted into another bed. That bed, plus the bed from the dining room table conversion, plus the bed in the loft makes room to sleep six people.

This style of a motorhome is not really recommended for six adults because it is a little cramped in a six-seater motorhome. However, this is a great style for four adults or a family with four kids.

A six-seater motorhome is the biggest and most expensive motorhome, but because it is still built like a van, it is relatively easy to maneuver and affordable to fill up.

TRAKKA’s Volkswagen T6 Trakkadu is a motorhome that is built more for weekend trips than full-time living. It can seat four, but really only sleeps two, and comes with a pop-up roof that allows you to stand fully upright while moving around inside. There is no bathroom (see why it’s more for weekend trips?) but there is a full kitchenette.

There is a small water tank that allows you to wash dishes and hands in the sink, and the stove runs on diesel, so there is no need to lug around endless tanks of propane to power your stove and cook dinner. There are a back door and a sliding door on the side of the motorhome.

The seats in this model are actually quite innovative. They are on tracts that allow you to move them around the motorhome to create as much or as little space as you want. The motorhome itself is fairly small, so it is easy to drive and cheaper to fill up.

You expect the TRAKKA’s Volkswagen T6 Trakkadu to cost you less than $100,000 (it really depends on the model they get, but the average price ends up landing at around $100,000).

TRAKKA’s Torino is more suited for families and longer trips. This model could even be great for full-time living, especially if you are a couple and get the four-seater model for more space. The Torino comes in a two-seater model and a four-seater model.

The Torino, unlike the Trakkadu, includes a shower cabin and even has hookups for an outdoor shower that you can use for hosing off or for showering. Again, the dining room table can be converted into a bed. There are also outdoor lights, an awning, and a large double door in the back of the van for ease in traveling.

The boot (that’s what they call a trunk in Australia) is large, allowing for more storage for more supplies when you go off on longer trips. There is of course still a kitchenette and a workbench as well. There is also a camera in the back of the van to help you back up easier and safer.

Although the Torino is slightly longer and wider than the Trakkadu, it is still easy to drive, maintain, maneuver, and park when driving in the city. It also does well off the beaten path.

TRAKKA’s Jabiru is even better equipped for longer trips than the Torino and is the best option available if you want to go camp off of the grid. The Jabiru comes with a two-seater motorhome model and a four-seater model, each with multiple additions you can purchase.

The Jabiru makes enjoying yourself easier with outdoor lights, and exterior workbench and fridge access, as well as an exterior shower hookup. It runs on a lithium battery, which means it lasts longer and is way more efficient.

Everything (cooking, hot water, etc.) is diesel-fueled, which makes going off of the grid so much easier and means you don’t have to lug around clunky water heaters or propane tanks.

The bathroom in the Jabiru is pretty innovative, maybe the most innovative of all the Australian motorhome models. It is a shower and toilet in one, and you can slide the toilet out of the way while you shower so it doesn’t get wet. There is also a screen to cover your towel and toilet paper. The grate in the shower floor keeps you out of the water.

The Jabiru is the next size up from the Torino but is still a van, so it is still relatively easy to operate and have adventures in. The price for the TRAKKA’s Jabiru is not released yet, as the model is expected to release in March of 2019.

The TRAKKA’s Trakkaway is the most spacious of the bunch, and is another contender for the best motorhome if you want to go camping off of the grid.

Like the Jabiru, everything is run on diesel to eleminate the extra bulk you would have to carry like propane and extra gas cans. There is an exterior workbench, fridge, and shower, as well as an interior of each.

The sleeping situation in a Trakkaway has a lot of options. You can get a single bed or two single beds, or you can get a four-seater motorhome model with two full beds or a full bed and two singles.

The Trakkaway is the best option for full time living or extended trips. You can expect it to cost you around $185,000. It is the biggest of the bunch, so you will have to spend more to fill it up and it is more difficult to drive, but it does offer the most comfort.

RVing in Australia VS RVing in the United States

In Australia, they call their gas “petrol” and they charge per liter instead of per gallon.

If you are going to be traveling on the west side of Australia, everything is going to be more expensive and a lot more spread out. Make sure that you are prepared for breaking down in the middle of nowhere and having to spend more than you are used to for gas.

Unlike the United States, where the RV clique is full of all ages, Australia’s RVs are mostly owned and driven by senior citizens. They call themselves “Grey Nomads” and they totally own the road.

Where can I buy an Rv in Australia? You can buy an RV in Australia on websites like australianmotorhomes.com.au here. You can also visit dealers in Australia or find used ones on online yard sale sites. 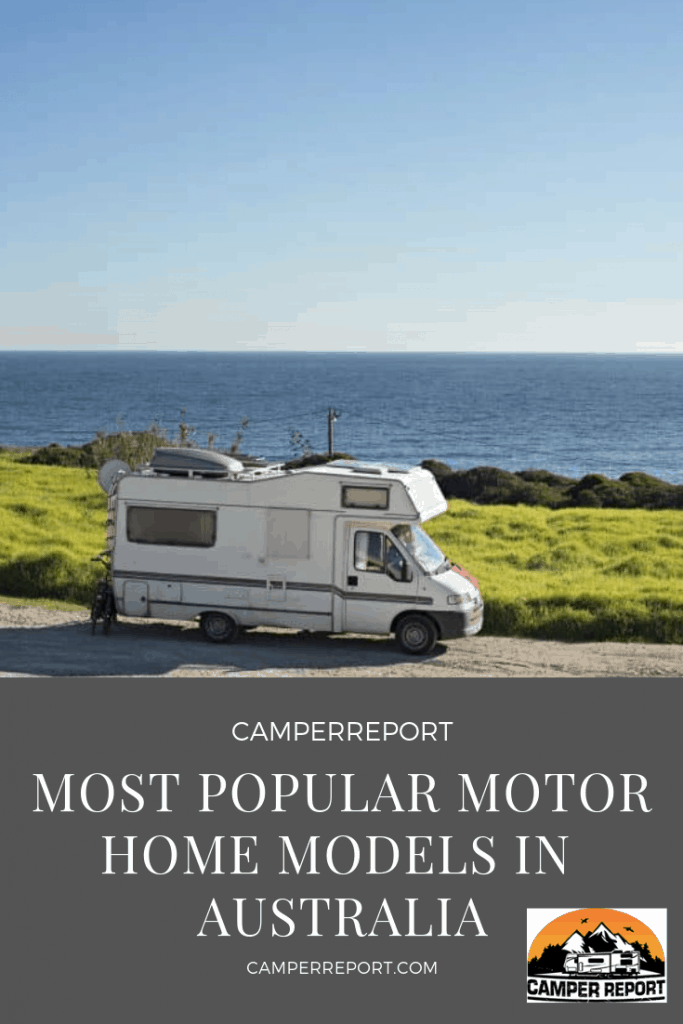 One thought on “Most Popular Motorhome Models in Australia”

link to How To Stop Bug Bites From Itching

Photo: Shutterstock Bug Bite Relief: The Best Anti-Itch Creams And Treatments Many campers and outdoor enthusiasts cite bug bites as the biggest mood killer for summertime fun. We have a...

The Best Portable Yard Games For Campers No matter how old or how young you are, or how many people you do or don’t travel with, having a yard game can bring campers together. You...