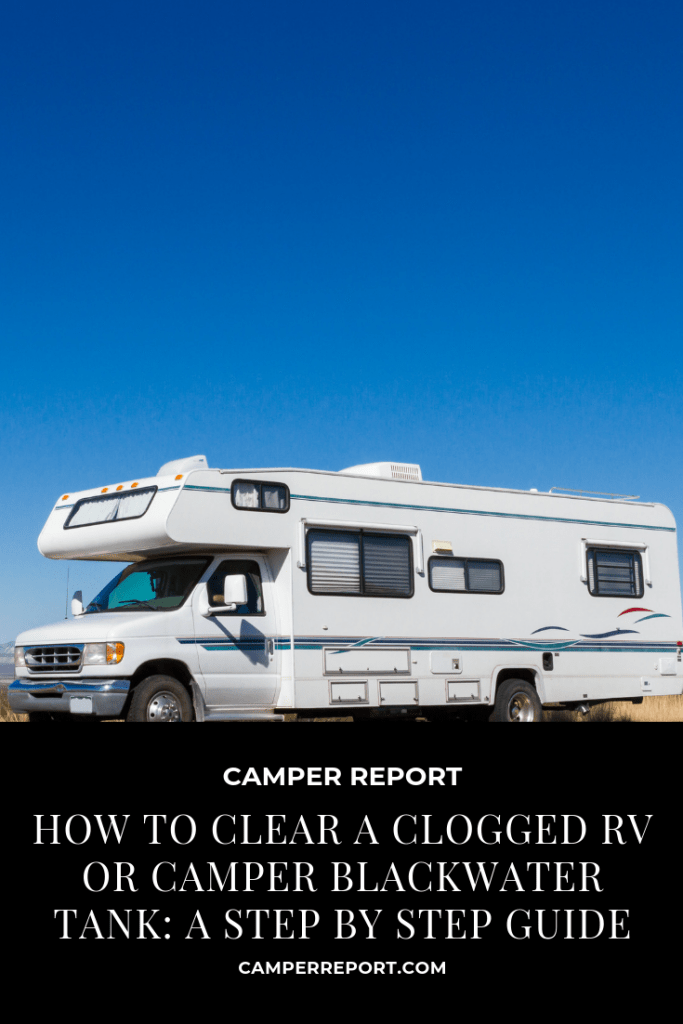 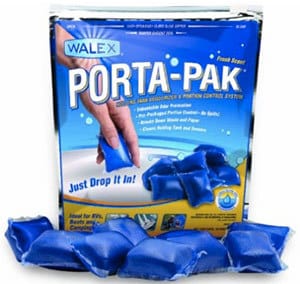 This is going to sound gross, but bear with me: A clogged blackwater tank is a lot like a clogged toilet.

In fact, as a disclaimer, this whole article is going to be gross. This is your blackwater tank we’re talking about here. It’s not the most pleasant of topics, but as an RV owner, it’s one you have to become intimately familiar with.

When it comes to what’s in the toilet, that’s what’s transferred to the blackwater holding tank. You can see then why this tank can get the dirtiest fastest. It’s also the one with the most immediate need for regular cleaning since it’s the most unsanitary.

How do you go about cleaning and unclogging your blackwater holding tank? In this article, I’ll present a detailed step by step guide that will present all scenarios for de-clogging a backed-up tank. I’ll also cover what causes clogs and how to prevent them in the future.

To figure out what causes blackwater tank clogs, you can simply ask yourself what causes your toilet to become clogged.

Yes, once again, this isn’t pleasant, but think about it anyway.

There are generally two culprits that cause your blackwater tank to get gunked up. The first is human waste (yes, feces) and the other is globs of toilet paper.

If your blackwater holding tank is a more recent, high-end product, then it might include a line of sensors within it. Each sensor is positioned vertically across the interior of the tank. They gauge the fullness of the blackwater tank. This way, when the levels are getting high, your sensor readout will inform you. You can then clean out the tank.

When there’s nothing blocking the sensors, they typically work very well. If there’s a backup of human waste or toilet paper in the tank though, the sensors can get obstructed. You then get inaccurate readouts that waste your time.

Even if your blackwater holding tank doesn’t have sensors, human waste and toilet paper buildup are still extremely problematic. You just can’t gauge how bad the problem is until you look in the tank.

How to Clear a Clogged Blackwater Tank: Step by Step

Diagnosing the source of the clog is often the first step in getting rid of the gunk in your blackwater tank. If you don’t know what’s causing it, after all, how can you go about fixing the issue?

Now, just because I likened your blackwater tank to a toilet in the intro doesn’t mean you can take a big plunger and just pull all the waste out. That would be cool, but there are no plungers big enough for the job. Sorry. Maybe someday.

You might have a few ideas for the job that you should be dissuaded from trying. These methods could severely damage if not outright break the blackwater tank if attempted. Not only would making a mistake of that magnitude be expensive, but have you ever been covered in human waste? You don’t want to experience that first-hand, ever.

For your safety and the longevity of your blackwater tank, DO NOT try the following methods:

Whew, with all that out of the way, you now know what not to do to unclog your backed-up blackwater tank. That’s great and all, you’re probably saying, but what do you do? Let’s get into that now.

A clean tank is a happy tank. Thus, the first step to unclogging your blackwater tank is to clean it. Now, hopefully you read the bullet points above and don’t bother trying any of those methods.

What you can do is purchase a septic system powder treatment and dump that down the tank. Rid-X is a popular brand for RV and camper owners. You can get several months of the stuff in one order from Amazon. It costs $6.88 for a single month’s worth, $13.88 for a three-month supply, and $73.66 to get a year’s worth of Rid-X.

Now why do you need so much? For the longevity of your blackwater tank, you should use Rid-X or your preferred product at least monthly. Yes, even if your tank isn’t clogged. This should likely prevent future clogs (and don’t worry, because I have plenty more tips on that later).

Your blackwater tank should be at least 1,500 gallons for Rid-X to get a true, deep clean. Each month’s supply is roughly 9.8 ounces and includes enzymes and natural bacteria in powder form. From grease to oils, proteins, and yes, even toilet paper, Rid-X will get it all.

To ensure your blackwater tank is clean, follow the directions on the Rid-X box or powder cleaner of your choice. For more detailed help, read this article I wrote about how to clean and flush an RV black tank.

Step 2: Wipe down the Line

Your blackwater tank holds all that waste via a line that connects it to the toilet. This line, if not cleaned regularly, can develop pyramid plugs. These are a type of hardened waste material that forms on and around the line. Too many pyramid plugs can gunk up your connection.

How do you get pyramid plugs in the first place? Failing to clean the blackwater tank is the main cause. It’s not too late to start caring for your tank line if you’ve discovered pyramid plugs. In fact, you have two options to do so.

The first is to get an auger. Now yes, an auger is a type of toilet snake, which I said before not to use. What gives? The line has pipe within it, so an auger is perfectly fine to use, but only for this job. That said, it’s recommended you buy the hand-operated version over a motorized auger. It’s possible to pierce the blackwater tank with a motorized auger if you’re not careful.

Once you have your auger, gently guide it down the length of your pipe. Poking around should begin to break up the pyramid plugs. If you can squeeze a hose through the pipe, that should wash away the remaining plugs. Otherwise, a long spray wand will do the trick.

If you’d prefer not to do all that or you can’t, you have another option. It involves adding water to your blackwater tank, filling it halfway. Now mix in liquid soap. You’ll then have to turn on your RV or camper, driving around on rough terrain. The goal is to move the water around without you having to do so manually.

After passing the water through your pipes, let the tank sit. After a few hours, you can flush the line. Hopefully, you should have gotten rid of all pyramid plugs.

Now that your blackwater tank and line are practically spotless, it’s time to move on to some troubleshooting methods. The first is to look at your tank valves and ensure they’re open and running. This may seem kind of silly, but you may have missed something when setting up your vehicle. For instance, is the sewer line connected? Did you turn on every valve?

If not, go back and do some double-checking.  This may help the issue, and if so, hooray! You didn’t have to do much or spend a lot of money. If your blackwater tank is still clogged up, fret not. There’s still a lot you can do.

Fishing around in your toilet is no fun, and if there’s a chemical that can do the job faster and more efficiently, you’ll spring for it, right? The same is true with your blackwater tank. If you don’t have to reach around in there too much, then spare yourself the trauma.

Chemical treatments are incredibly common, and there are tons on the market. Here are some you might consider for your own blackwater tank, all of which are available on Amazon:

While chemicals will almost always do the trick, if you can’t wait for them to arrive or you’d prefer to go the chemical-free route, you can. The water hose method should remove odors and waste from your blackwater tank without any chemical cleaners.

Bring the clear hose connector over to the blackwater tank, hooking it up there with the connector. It is integral that the hose is clear or translucent. Otherwise, how else will you be sure this method is working?

Once you’re done drilling, feed the five feet of water line through your connector. Turn the blackwater tank’s valve on so the water line gets through to the tank. Now run water through the water line.

Most of the time, water should turn on, but not always. Sometimes the line itself gets backed up. If so, the waste should start moving through the water line instead of water. Let this go on for as long as necessary to clean the interior of the blackwater tank.

Step 6: Or the Ice Cube Method

If drilling seems like too much (which is understandable), you still have yet one more option. This is known as the ice cube method. It may sound a little strange, but hey, don’t knock it ‘til you’ve tried it. It’s worked for many an RV and camper owner.

Basically, what you do is pour water into your blackwater tank. It shouldn’t be completely full, only about 1/3rd of the way. Then, top the rest of the tank off with ice. Yes, it’s probably going to be a lot of ice, so shop beforehand.

By driving around in your RV or camper, the ice should dislodge stubborn waste and toilet paper that’s stuck to your blackwater tank. You can then drain the whole thing and your tank should hopefully be cleaner.

Step 7: Bring in the Pros

If none of that works, then you have only one choice left, and that’s to pull over and call a professional repairperson. This could be costly, but at least you’ll be certain your blackwater tank is free of all waste and residue.

Hopefully, one of the methods recommended above worked to clean your blackwater tank completely. Whether you used chemicals, did some manual work, or even relied on the pros, your tank is now free of all waste. The sensors, if you have any, are unobstructed by toilet paper chunks.

Great! Now you’re going to have to work to keep your blackwater tank looking and running this well. Yeah, sorry, but regular blackwater tank maintenance is kind of a part of RV or camper ownership. It’s a pain, but it is what it is.

Here’s what you should do to prevent future clogs and keep your blackwater tank as tidy as it can be:

Although it’s not a fun topic to talk about, your blackwater tank is an important part of your RV or camper. It’s where all the toilet waste goes, including feces and toilet paper. It can easily get clogged up, causing major headaches.

Luckily, it’s somewhat easy to diagnose the source of the issue. Above, there are plenty of troubleshooting methods you can try to get to the bottom of your clogged blackwater tank.

Be mindful of how you use the toilet, clean the blackwater tank often, and never leave it empty. If you follow those basic instructions, you shouldn’t have further issues.

11 thoughts on “How to Clear a Clogged RV or Camper Blackwater Tank: A Step by Step Guide”

The Best Things To Do In Quartzsite

Our Favorite Storage Bins For RVers