If you’ve recently bought a fifth wheel, one of your main concerns is probably how to set it up correctly. A solid foundation is vital to the setup process of every fifth wheel, and some people like to use tripod stabilizers to provide stability to their vehicles. However, to some owners, it’s not always clear whether or not this step is necessary to the process at all.

So are tripods necessary equipment for fifth wheels? Tripods are not necessary, but can be helpful when stabilizing a fifth wheel. The type of terrain under the fifth wheel will determine the type of stabilization equipment needed.

Tripods are definitely useful pieces of equipment for fifth wheel owners to keep on hand, but many people consider them to be nonessential. However, they’re cheap, easy to use, and useful to have as a backup. That being said, there are many other methods that are considered to be more useful and reliable at keeping your fifth wheel steady on its feet!

The Benefits of Using a Tripod

Tripods are helpful pieces of equipment for most fifth wheel owners. Their main purpose is to provide stability to a parked fifth wheel and to minimize shaking and rattling from movement both inside and outside. Tripods are set up beneath the overhang of a fifth wheel and can help to compensate for the extra weight.

If you are especially sensitive to movements of the floor, a tripod stabilizer would be a good purchase for you. You don’t want to be woken up in the night just because someone is walking to the bathroom and shaking the whole structure!

Most tripods are also cheap and easy to buy in a store or online. An average tripod will usually cost around $100, though there are obviously some that are on the cheaper and more expensive ends of the spectrum. If a tripod costs less than $50, I would be suspicious of its quality. But on the other hand, if it’s over $300, chances are that it’s more style than substance.

The simple setup for a tripod is also a big bonus! It only takes a few minutes to park your fifth wheel, adjust the tripod, and get everything settled into place. They have a fairly intuitive setup process, so you don’t need to be a mechanical expert or spend hours cranking everything into place.

Many tripod varieties are also collapsible, making them easy to fit in with your luggage and adventuring gear.

There are a variety of tripods available on the market. This is useful because they are widely available and relatively cheap. The best kind for new buyers to look at would be those that are adjustable to different terrain, heights, and weights.

You want a tripod that will work in a variety of different circumstances after all!

Some of the most highly recommended brands include the Ultra-Fab 19-950001, the Camco 57391, and the BAL 25067 FastJack. Each of these tripods are available on Amazon for a good price! Any one of them will be able to provide your fifth wheel with a good base of stability and security.

In general, tripods are a good piece of equipment for fifth wheel owners to have. They don’t require much time, space, money, or energy to use. They also help provide your fifth wheel with a solid foundation that many people appreciate.

I’d encourage the light sleepers and particularly careful fifth wheel owners to invest in a tripod. You’re not out much either way and it can be a nice way to ensure that your vehicle is as solid as it possibly can be.

The Drawbacks of Using a Tripod

There are definite benefits to using a tripod to prop up your fifth wheel. But while a tripod is a nice thing for many fifth wheel owners to have, it’s not the most necessary piece of equipment either. Its main function is to stabilize a parked fifth wheel and prevent any shaking or rattling from people moving around inside.

However, most fifth wheels are built to minimize this movement already, making tripods unnecessary for many people. Small movements don’t bother the majority of people and many fifth wheel owners have expressed that they have done just fine without using a tripod.

Some owners have even stated that they noticed no difference in their experience whether they were using a tripod or not.

In addition, tripods don’t work well in every situation. If the ground is too uneven or soft, most tripods won’t be able to set a firm foundation. This kind of defeats the purpose of having one in the first place!

If you’re not very sensitive to movement or just want to save yourself a little bit of money, tripods are a fifth wheel accessory that most people could probably do without.

If you’re looking for a reliable way to level and stabilize your fifth wheel and don’t want to invest in a tripod, there are other ways to get the job done!

Keeping your vehicle flat and stationary is essential. The last thing you want is for your living space to tip, rock, or start rolling away! To prevent this, there are a couple of alternative pieces of equipment you can use instead of tripods.

Wheel chocks are small wedges (often made of plastic or rubber) that are designed to slide behind vehicle wheels and keep them from turning or rolling around. Every fifth wheel owner should be using these for safety and stability, no matter how flat the ground may seem.

If your fifth wheel is parked on an incline, or if it is accidentally pushed out of place, it can roll out of control. Wheel chocks are designed to keep a vehicle still, even if other safety measures fail.

For fifth wheels, you should place wheel chocks behind every set of wheels. Simple wedges will usually do the job just fine, but there are also products that can wedge between two wheels at once, keeping both of them locked into place.

For multi-wheel stability chocks, the BAL 28005 Deluxe Tire Chock is one of the cheapest and most highly ranked products.

Once your wheels are safely locked up, you can focus on leveling and stabilizing your fifth wheel. Stabilizing jacks are small, flat-topped jacks that can be used to create an even base. These should be placed beneath each corner of the fifth wheel and raised until the vehicle is level.

You can also use additional jacks underneath the sides and center of the vehicle if you need extra support. Stabilizing jacks are more versatile than tripods because they can provide support anywhere it is needed and not just on the single elevated end of a fifth wheel.

The Lippert 298707 Electric Stabilizer Jack Kit is a great product that is perfect for creating a stable base for your fifth wheel. It includes multiple jacks and requires less effort to set up because it uses electric jacks rather than manual ones.

Both stabilizer jacks and wheel chocks are good ways to keep your fifth wheel stable and still. I would say that these are both essential things to have when it comes to setup.

However, if you feel like you would like a little extra support, a tripod is a fine addition to add to your fifth wheeling kit. They are more of a luxury item than an absolute necessity, but every little bit of stability helps!

What Accessories do Fifth Wheels Need? Some good items for every fifth wheel to have include, wheel chocks, leveling jacks, stabilizer jacks, landing gear, leveling blocks, and a battery box. 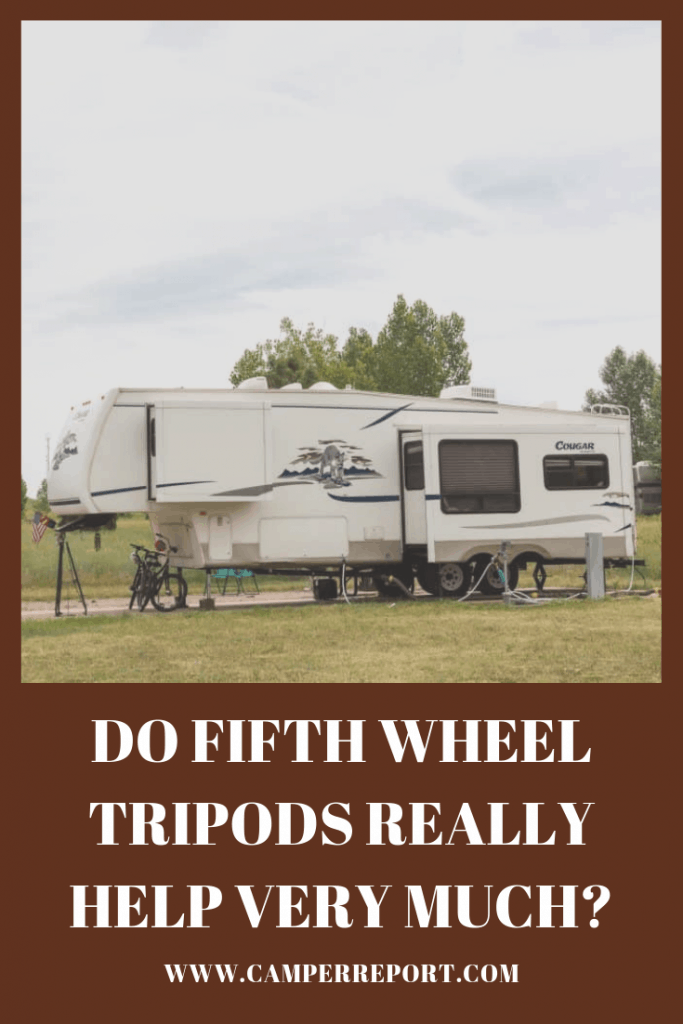 Do Electric or Manual Jacks Work Better? Electric jacks require less physical effort to operate, but they usually have a lower lifting capacity. Manual jacks are harder to use, but they can lift more weight. For most vehicles, however, electric jacks will work just fine.