When you’re thinking about buying your first fifth wheel, there are a lot of factors to keep in mind. You’re probably excited about all the great models, amenities, floorplans, and benefits available to you. But before you ever buy a fifth wheel, you first need the right vehicle to tow it. Fifth wheels need to be towed by pickup trucks due to their unique design and hitches.

The Toyota Tundra is a popular truck that’s enjoyed by many people. But can it handle the weight and strain of towing a fifth wheel?

Toyota Tundras are smaller than many other varieties of pick up trucks, and their tow capacities reflect this. But don’t discount them immediately! There are still some fifth wheels that a Toyota Tundra will be able to tow, and I’ll explain the requirements that your Tundra and fifth wheel must meet in order to safely tow.

So let’s find out if this vehicle will work for your needs!

There are a few different models of Toyota Tundra available on the market today. They are all strong and reliable trucks, but for the context of this question, they have some important differences in matters of weight limits, tow capacity, and payload.

Each of these terms will be explained in detail below, but to start, let’s look at a comparison chart of these different Tundras. To provide the most current information available, each of the models listed are from the 2019 vehicle lineup.

For more information on the different Toyota Tundra specifications, you can visit their website.

As you can see, there’s a pretty big difference between the towing capacities of these three models. The Toyota Tundra SR and SR5 are probably too small to tow the fifth wheel of any size. Even the lightest fifth wheels are about 7,000 lbs. which is more than these little guys can handle.

On the other hand, the rest of the Toyota Tundras on this list are capable of hauling a little more weight. They still can’t safely haul massive fifth wheels, but they can manage some smaller, lighter varieties. These are the types you’ll want to keep in mind if you’re determined to tow a fifth wheel with a Tundra.

Now that we’ve got some basic numbers out of the way, let’s talk about what makes a truck qualified to safely tow a fifth wheel. The main factors that are involved are the towing capacity and the payload of the pickup truck in question.

Towing Capacity of the Toyota Tundra

While the overall weight of the item you’re towing will apply to this measurement, the weight of any necessary hitches or installed equipment should also be taken into account. Some fifth wheel hitches can weigh several thousand pounds, and this will definitely affect whether or not your Toyota Tundra can handle that amount of additional weight.

Trying to haul a trailer that’s above your tow capacity creates a danger to you, your car, and everyone else on the road around you. The extra weight will put a lot of strain on your vehicle’s structure, engine, and tires. Accidents are much more common if you tow more than your car can handle, and you’ll also wear your vehicle out much faster by doing this.

The towing capacity of various vehicles can be found through most dealer websites. This is fairly standard information for them to include in the specifications, so it shouldn’t be hard to find.

If you already own a Toyota Tundra, your truck’s tow capacity should be listed somewhere inside the vehicle, or in its product specifications. If you can’t find the towing capacity of your vehicle, you can also check it at rv.campingworld.com/towguide. This is a great website that can tell you the tow capacities of specific vehicles with just a few questions to narrow down its type.

Payload of the Toyota Tundra

The payload of a vehicle refers to how much weight your vehicle can carry in terms of passengers, gear, and cargo. The payload takes both the cab and the truck bed into account in its weight limit. The payload for the different Toyota Tundra models range between 1,600 and 1,660 lbs.

The payload capacity of a vehicle plus its base curb weight make up the gross vehicle weight rating or GVWR. This combined weight measurement will tell you the maximum weight that your truck can reach and still safely operate.

There’s not as much flexibility in this range as there is for the tow capacities of different models. Since this measurement also covers the weight that will be sitting in the truck bed, a fifth wheel hitch will contribute to the weight that needs to be added to the overall calculation.

Standard fifth wheel hitches must be installed in the bed of their respective tow trucks. They usually stay installed once they’re put in and they tend to take up a large amount of space. They’re also quite heavy, which can be problematic for people who are working to stay below the maximum payload limits.

As was mentioned previously, most fifth wheel hitches weigh several thousand pounds. That can be a problem for the low payload limit of Toyota Tundras.

Gooseneck hitches are much smaller and lighter hitches that some people prefer to use in their truck beds. They don’t always work for fifth wheels though, so you’ll need to check whether or not your desired fifth wheel can connect to a gooseneck hitch before deciding to pair it with a Toyota Tundra.

Since the payloads of Toyota Tundras are relatively low for pickup trucks, you’ll need to be careful about how much gear you pack in them. A Tundra might be able to pull a small fifth wheel, but you’re going to have problems if you also add a ton of cargo weight in the truck itself.

Payload capacity is a fairly standard measurement for dealers to provide. You should be able to find it on the websites of dealers, as well as the in the vehicle information that came with any Toyota Tundras that you may have previously bought.

Learning the towing capacity and payload capacity of your tow truck is important to know before you ever decide to look at fifth wheels. After all, you don’t want to fall in love with a certain design and then have to abandon it because it’s too heavy!

Knowing the limits of your truck before you begin the search for a good fifth wheel is critical to the selection process. If you’re committed to using a Tundra, this choice will eliminate a pretty large selection of fifth wheels right off the bat.

There is a huge range of fifth wheel models, brands, and editions, so a complete list would take all day to read. So instead, let’s go through some important terms and measurements you’ll need to know to choose suitable fifth wheels for yourself.

Start by narrowing down your search to a few brands that you’re interested in, then begin exploring their websites. Many websites offer the specifications, weights, and measurements of their vehicles up front, but you can also request additional information on a case-by-case basis.

This measurement refers to how much a fifth wheel weighs when it is completely empty of gear, water, fuel, or any other cargo. Essentially, the UVW is the curb weight of a fifth wheel. This is important to know so that you can find the base weight of any fifth wheels you’re interested in buying.

This is an important measurement to check. If the GVWR exceeds the towing capacity of your Toyota Tundra, you’ll need to be very careful about how much you pack in it. The fifth wheel might hold up fine under the weight, but your truck is going to struggle if you approach the limits of the GVWR.

The GVWR of any given fifth wheel should be available through the websites of dealers, or, barring that, listed on a sticker on the vehicle. Stickers containing information about the GVWR of fifth wheels are generally found on the outside of the vehicle on the off-door side.

This measurement refers to the total combined weight of the tongue, pin box, hitch attachment, and base of the fifth wheel hitch. This usually adds up to a couple thousand pounds, so this needs to be taken into account with your truck’s payload and tow capacity.

How to Calculating if Your Fifth Wheel is Safe to Tow

Now that we’ve gone through some of the important measurements and terms regarding fifth wheel towing, let’s talk about how you can calculate whether or not your Toyota Tundra can tow the fifth wheel of your dreams.

This is a pretty simple process, and all it takes is some simple math to figure it out.

Most people pack between 750 and 1,500 lbs. of weight in their fifth wheels. This varies widely from one person to another, but you’re generally going to fall somewhere within that range. This step will give you a good estimate of the final weight of your loaded fifth wheel.

(Note: This final weight should not exceed the GVWR limit for your fifth wheel for two reasons. Firstly, because going over the weight limit isn’t safe for driving, and secondly, a weight that’s over the GVWR limit is probably going to be too high for a Toyota Tundra to pull).

You can, and should, weigh your fully loaded fifth wheel before you take it out for its first road trip. We’re all human after all, and sometimes our individual measurements might get off. Weighing the fifth wheel at the end of the loading process can help you ensure that it’s at a safe weight for your truck to pull.

2. Finally, you’ll want to look at the weight of your fully loaded fifth wheel and compare it to the tow capacity of your truck. 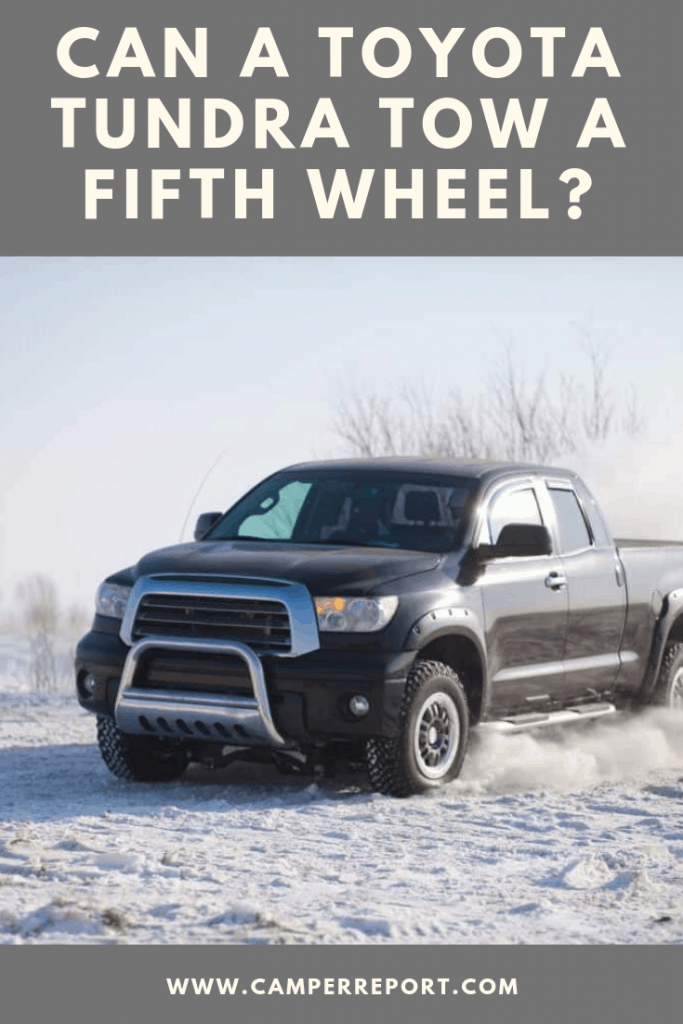 As long as you’re under the maximum weight limits for your truck and fifth wheel, you’re legally fine. Just make sure that you feel good about the amount of weight that you’re pulling before you head out.

4 thoughts on “Can a Toyota Tundra Tow a Fifth Wheel?”

The Latest RV Recalls For 2023